New findings on the glass phase of ‘active matter’ ends an intense debate in the soft matter physics community.

Is it in a liquid phase or a ‘glassy’ phase? This question has been the subject of intense debate as physicists try to understand the behavior of so-called ‘active matter’ – a relatively new type of matter where particles use ‘a little internal engine’ to move. With a new observation – published in the prestigious journal Physical Review Letters – TU/e researchers now resolve all contradictory results at the same time, thereby paving the way towards a better understanding of cell behavior in diseases like asthma and cancer. 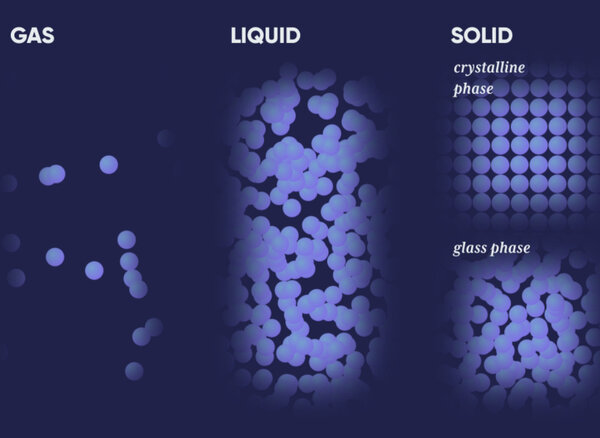 For many, the phrase ‘phases of matter’ immediately evokes thoughts of gasses, liquids, and solids – the best-known phases of matter. Between the liquid and solid phase though, you’ll find the glass phase, a phase that behaves like a solid, but on the inside looks like a liquid.

This typical picture of the phases of matter (gas, liquid, solid, or glass) considers the particles as passive, meaning that they only move due to thermal energy and the forces they experience through interactions with neighboring particles.

In recent years though, active matter, which consists of particles that convert energy using ‘a little engine’ into directed motion and means they are continuously out-of-equilibrium, have garnered noteworthy attention. And active matter has a glassy phase too.

“It’s been known for years that active matter exhibits glassy behaviors that might be relevant for helping with our understanding of cell behavior in asthma, wound healing, and cancer metastasis,“ says Liesbeth Janssen from the department of Applied Physics and study lead.

First author and PhD researcher Vincent Debets also highlights this application: “One of the most interesting applications of this work will be for human cells that behave like a glass such as the cells in asthma and cancer.”

However, in recent years, there has been lots of debate about the glassy behavior of active matter, and it’s led to some disagreements. “Some say these active systems are more liquid than a passive glass, others contend that the system is glassier, while others say the system becomes more liquid-like before finally becoming glassier,” says Janssen.

“With this study, we provide an unambiguous and simple explanation to clarify the position with regards to all of these contradictory results,” adds Janssen.

It all comes down to the relationship between the so-called cage length, which is the typical size of a cage for a specific particle formed by the neighboring particles surrounding the particle (see image), and the persistence length, the average distance travelled by a particle before it changes direction.

“The glassy phase can be thought of as a large collection of such cages, in which each particle can only jostle around in its own cage but can never escape from it,” notes Debets.

“When the persistence length is smaller than the cage length, the active particles can explore their cage for an opening. If they can escape, they are acting like passive particles in a liquid. But when the persistence length is above the cage length, particles can no longer efficiently scan their cage and become stuck in the cage. As a result, the system shows more glassy-like behavior where the system has properties like a solid.”

The cage length is a very important physical concept, which has already helped to better understand why a passive material becomes more solid-like when it changes from a liquid to a glass.

By condensing all of the system dynamics down to the simple principle of how the persistence length compares to the cage length, the researchers have reconciled the various proposals from the literature.

For the follow-up study, the researchers plan to study the effect of cage length on living active glasses in actual biological cell layers.

“In future work, we’ll study how physics dictates cellular behavior. Perhaps we can modify the cage length, and thus the glassy behavior of the cells by changing their shapes. This could then, for instance, make it more difficult for tumor cells to detach from the primary tumor and metastasize. Alternatively, by identifying the cage length directly from the snapshots of a cell layer, we might predict whether it is in a liquid or glassy phase, thereby leading to new medical diagnostic approaches,” says Debets.

This new research has shone a new light on the behavior of active glassy matter.

Researcher Vincent Debets spoke about the research on BNR Nieuwsradio. Listen to the interview here (in Dutch).

January 30, 2023
‘I want to be part of the group, not sit in an ivory tower’
Silvia Lenaerts, TU/e's new rector magnificus, is enthusiastic about getting started at Eindhoven. Social safety and sustainability are themes she believes are...
Read more
January 26, 2023
King Willem-Alexander opens ELEO battery production plant in Helmond
The TU/e startup makes high-performance battery systems for a variety of industrial applications.
Read more
January 26, 2023
Cardboard with a more sustainable coating
Sterre Bakker defends her thesis at the department of Chemical Engineering and Chemistry on January 27, 2023.
Read more