Algorithms to reduce alarm fatigue in neonatal intensive care units, to monitor vital signs in premature babies and to prove the benefits of parent-baby bonding.

Every year, nearly 15 million babies are born too soon and need to be cared for in neonatal intensive care units (NICUs). Modern NICUs have taken a major leap forward in terms of implemented technologies. Yet, much still needs to be done in terms of safety, reliability, and comfort of the monitoring systems. Rohan Joshi, PhD candidate at Eindhoven University of Technology, developed in close cooperation with Máxima MC algorithms to prioritize better the large number of alarms in NICUs. Also, he designed algorithms that can track the benefits of skin-skin contact between premature babies and their parents. Lastly, he implemented a contactless sensor which can monitor the breathing and the motion of premature babies and predict the risk of severe infections. Joshi obtained his PhD cum laude on August 30th.

Premature babies are special patients with unique needs. Some babies may be born after just six months of pregnancy, weigh as little as 500 grams and have severely underdeveloped organs. These babies spend several weeks or even months in neonatal intensive care units (NICUs), in incubators within a thermo-regulated environment. Within the incubators, ventilators support the immature lungs, while the breathing rate, together with other vital signs, is continuously monitored so that clinicians can be promptly alerted in case of emergencies.

Modern NICUs can generate several hundred alarms daily. The vast majority of these alarms require no clinical action, resulting in the so-called phenomenon of ‘alarm fatigue. Alarm fatigue, much like the crying wolf effect, can reduce the responsiveness of clinicians to potentially important alarms and compromise the safety of babies.

Rohan Joshi, under the supervision of prof. Loe Feijs and distinguished prof. Sabine Van Huffel, developed several strategies to reduce the vast number of alarms that are generated in NICUs and make the remaining alarms clinically actionable. In close collaboration with his co-promotors dr. Peter Andriessen and dr.ir. Carola van Pul from Máxima MC in Veldhoven, Joshi analyzed monitoring signals of patients and identified via machine learning algorithms approaches to eliminate less severe alarms related to low heart rate and low oxygen saturation on the one hand, while creating earlier warnings for critical alarms, on the other. This topic is very important as Máxima MC promotes family centered care, where a quiet environment is needed for optimal care for critically ill newborns. By reducing the overall number of alarms and sounding a large number of critical alarms up to 20s in advance, alarm fatigue can be drastically reduced while allowing clinicians an opportunity to act early on critical alarms.

Monitoring of vital signs in NICUs is not always comfortable for babies. For instance, monitoring of the breathing rate requires the attachment of adhesive electrodes to their delicate skin. To improve babies’ comfort, Joshi designed an alternative, contactless monitoring system, based on a film-like pressure sensor that can be embedded in the mattress of the incubator. To test the sensor, Joshi set up a clinical study at Maxima MC, under the supervision of dr. Andriessen and dr. van Pul. The study showed that the sensor is as reliable as standard electrodes in monitoring the breathing rate of premature babies. Also, unlike standard electrodes, this sensor could be used to monitor pathological lack of motion, which can act as an early warning sign of life-threatening infections (sepsis) or in detecting the type of apnea frequently seen in prematurity. Such early detection of sepsis is essential for prompt intervention via antibiotic therapy and it could save the lives of babies at risk. Also, discriminating central apnea from obstructive apnea is useful in choosing the right therapeutic strategy. 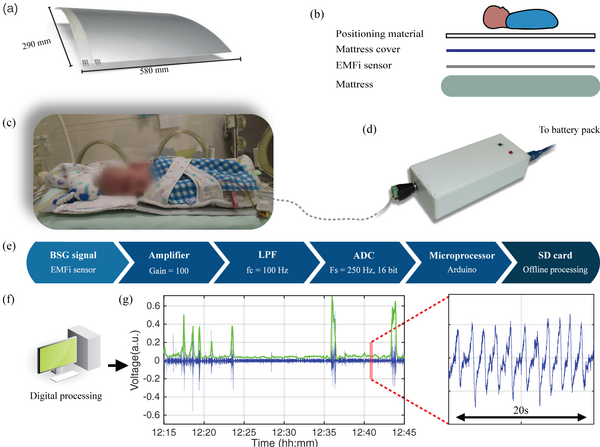 The film-like pressure sensor (a) is embedded in the mattress (b) of the incubator (c) and connected to the signal acquisition system (e), which is powered by a battery pack (d). The acquired signal is processed by a computer (f) which displays the infant-motion (g, green) and the breathing rate (g, blue). Picture: Joshi et al., 2018.

The importance of parent-baby bonding

To date, few technological interventions exceed the therapeutic benefits of bonding between babies and their parents. Researchers at Maxima MC have previously shown that parent-baby bonding is effective in, to name a few, reducing the risk of hospital-acquired infection, facilitating breastfeeding and weight gain. In modern NICUs, parent-baby bonding is encouraged via the practice of Kangaroo Care, a technique in which the baby is held chest-to-chest and skin-to-skin with a parent for an extended period of time. “While Kangaroo Care has been recognized as an important therapeutic intervention”, explains Joshi, “so far it has not been possible to quantify and visualize precisely its benefits for premature babies”. Joshi overcame this limitation by monitoring the heart rate of premature babies being subjected to Kangaroo Care as opposed to being in an incubator. Joshi: “Premature babies have a high heart rate, which is interspersed with severe pathological decelerations. We demonstrated that, when babies receive Kangaroo Care, the severity of these decelerations is reduced by a third. This happens because babies are co-regulated by the bodies of their parents.” For Joshi, this real-time visualization of the benefits of Kangaroo Care is ‘very powerful’ in motivating parents to practice it and clinicians to facilitate it.

This research shows how data-driven solutions and algorithms based on machine learning can optimize clinical decision making and improve workflow in NICUs. The contactless monitoring solution developed by Joshi opens up new ways for reliable monitoring that are both comfortable for premature babies and a source of new physiological information. Lastly, this research provides quantitative and visualizable evidence of the benefits of parent-baby bonding.