Youri van Hees defended his PhD thesis at the department of Applied Physics on December 7th.

Due to the ever-increasing growth of our data consumption, researchers are looking for faster, more efficient, and more energy-conscious data storage techniques. TU/e researcher Youri van Hees uses ultrashort light pulses that enable him to write information. This way, he combines the advantages of both light and magnetic storage.

His thesis cover looks like an old-fashioned British tabloid newspaper, which includes a large headline of a playful article in the Spintronic Chronicle about femtomagnetism, photonics and spin transport and reads ‘Quick as Flick.’ A smart way to create some enthusiasm among a wider audience for complicated matters of technology? “More of a nice extra,” says Youri van Hees, who defended his thesis at the department of Applied Physics on December 7th. Apart from being a researcher down to the last nanometer, he’s also a passionate music lover and longtime fan of progressive rock band Jethro Tull. “My favorite album, Thick as a Brick, was released exactly fifty years ago. The cover of my thesis is a reference to their album, which came wrapped in a satirical edition of a non-existent local newspaper. Nevertheless, it was quite instructive to write about my research in a way that was appealing to non-physicists. Only then do you realize how inextricably linked you’ve become to certain technology.” 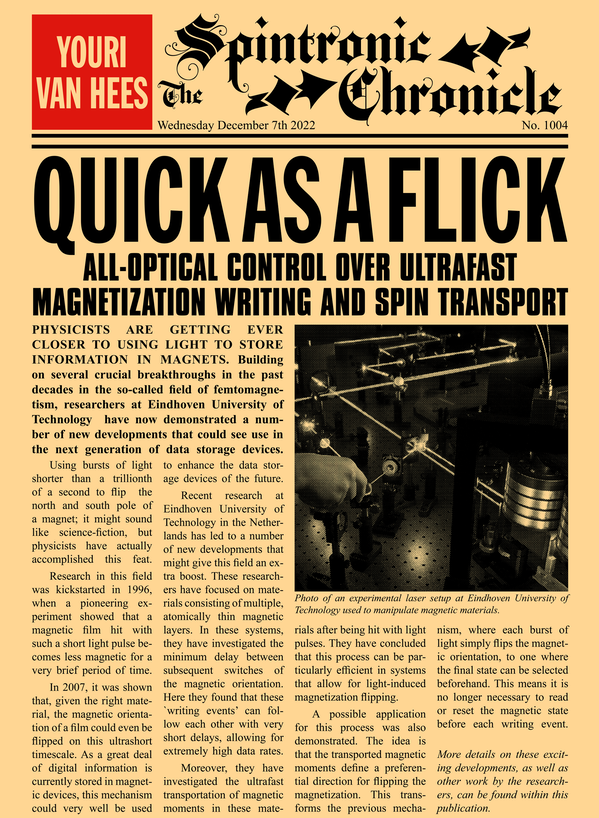 Perhaps it’s the cover of his thesis that will draw the most attention, but its content is equally interesting. Van Hees spent the past four years working on so-called femtosecond lasers, small mirrors, and thin magnetic layers. And successfully so, because his research has brought the technology of writing information on a magnetic medium with the use of light one step closer. This is important for data centers because they would like to start using light as the most energy-efficient means of information transmission. Van Hees: “People have been using magnets to store data for a long time now. This is done in the form of bits – the familiar zeros and ones, which are like tiny magnetic domains with a north and a south pole. To write data, those poles need to switch. We now make those poles shift by creating a magnetic field. Your laptop’s hard disk, for example, contains a small coil with which you can write small magnetic domains. Until now, we always needed an electronic intermediate step for that, because that coil needs to be actuated. That process costs extra time and energy.”

When he shot an ultrashort laser pulse – “even smaller than one billionth of a second” – at magnetic material, Van Hees didn’t just notice something happening locally, but he also realized that the pulse was able to move electrons, which carry magnetic information. He lined up a few short light pulses like rail wagons and used this setup to influence magnetic materials with various small mirrors. “These ultrafast light pulses allowed us to shift the north and south poles of the magnetic domains, which made it possible to skip the electronic intermediate step. It’s also possible now to know  in advance with certainty whether you’ll write a ‘0’ or a ‘1’, and all without having to know the bit’s initial state. That makes it even more efficient. We also investigated which magnetic materials we need to use to make the bits stable with this new light method. We can’t use the standard sandwich formula of layers of cobalt and gadolinium for stable data storage. However, it turns out that an extra atomic layer of the ferromagnetic metal terbium works really well. We are still looking for the right balance because even though we have stable bits now, the magnetization switching is not as efficient as we would like it to be.”

Does all this mean that we can expect a photonic data storage breakthrough any time soon? Van Hees says that the technology of writing data with light at the laboratory level is becoming mainstream, and that the chip industry is following this kind of research closely. But, he adds with a smile: “The size of our current laser pulse generator is 60x30x30 cm. It will take some time before it can fit in your pocket.”

There’s a short message on his news cover’s back page, on the right beneath the non-collinear puzzle, which illustrates the fact that minimization can sometimes be a rough business. A true story, Van Hees says. “We had ordered a special mirror for our setup, but it was too large and didn’t fit. Physics sometimes can be frustrated too, so what do you come up with? Together with a colleague, I went to work on the mirror with a screw driver. We managed to make it smaller allright, but we couldn’t exactly use it any more either.”

Title of PhD thesis: Quick as a flick: All-optical control over ultrafast magnetization writing and spin transport. Supervisors: B. Koopmans and R. Lavrijsen.

January 10, 2023
All the best for 2023!
Read the New Year's message of the TU/e board here.
Read more
December 21, 2022
Integrated optical isolators and circulators on an InP membrane platform
Rui Ma defended his PhD thesis at the department of Electrical Engineering on December 20th.
Read more
December 20, 2022
Sixteen awards in NGF Quantum Technology program, 2 TU/e projects
A prison for ions and cold atoms for a unique quantum simulator? Checking the geographical position of a bank computer with quantum verification? Quantum optics...
Read more

January 31, 2023
Rats with TU/e backpacks sniff for victims under rubble
Student Bram van Kasteren has improved communication between rat and rescuers for his master's thesis
Read more
January 30, 2023
‘I want to be part of the group, not sit in an ivory tower’
Silvia Lenaerts, TU/e's new rector magnificus, is enthusiastic about getting started at Eindhoven. Social safety and sustainability are themes she believes are...
Read more
January 26, 2023
King Willem-Alexander opens ELEO battery production plant in Helmond
The TU/e startup makes high-performance battery systems for a variety of industrial applications.
Read more