Bregje de Wildt explored different ways to grow ‘mini-bones’ in the lab that could be used to test newly developed medicines for bone diseases.

Purple is bone resorption by osteoclasts and orange is the formed new bone by osteoblasts. (Image: Bregje de Wildt).

Human bones can recover from small fractures, but if the fractures are too large or the regrowth process is unbalanced, as is the case with osteoporosis, treatment is required. To develop treatments animal experiments are often used, but some treatments developed in this way don’t work in humans. So, Bregje de Wildt for her PhD research has explored ways to grow human ‘mini-bones’ in the lab that could be used to test medicines for treatments, and perhaps in the future, eliminate the need for any animal experimentation when it comes to testing these medicines.

The human body relies on bones for support, for organ protection, for movement, and for mineral absorption and breakdown. “Bones may look like they are rigid and static, but in reality, bones are always changing and evolving,” says Bregje de Wildt, PhD researcher at the department of Biomedical Engineering at TU/e. “Cells come, and cells go. In particular, cells known as osteoclasts break down and resorb bone, while osteoblasts form an equal amount of new bone.”

It sounds a little strange that a bone cell with ‘blast’ in the name is involved in growing bone, but this part of its name comes from the Greek word blastano, which means to sprout or germinate. “Together, the osteoclasts and osteoblasts contribute to our bones’ ability to remodel or regenerate. Small fractures for the most part are a piece of cake, but for large fractures, or unbalanced osteoclast and osteoblast activity in conditions like osteoporosis, treatment is needed,” notes de Wildt.

Treatments for bone disorders are often developed via animal experiments. Every year around 500,000 animals are used for experiments in the Netherlands. Worldwide this number is estimated to be around 100 million. “Unfortunately, less than 1 out of 10 treatments developed using animal testing are also effective in humans, which is most likely because the animals used and humans are too genetically different,” says de Wildt.

So, to help evaluate treatments for human bone tissue, de Wildt and her collaborators from the Orthopedic Biomechanics and Bioengineering Bone research groups decided that the best course of action was to use human bone tissue in the first place. “Rather than using a person to test treatments, which would be unethical and risky on many levels, we explored a way to grow living human ‘mini-bones’ in the laboratory,” says de Wildt.

To grow the ‘mini-bones’, de Wildt needed four main parts. First, she needed specialized stem cells known as parent cells. Unlike pluripotent stem cells, which are cells that can become any type of cell in the body, the parent cells can only become either osteoblasts or osteoclasts.  De Wildt: “These parent cells need to receive the right biochemical signals to help them change into osteoclasts and osteoblasts.”

Second, de Wildt needed a structure on which the bone cells could merge together into the ‘mini-bone’. “For this we used silk from silkworms as it is a material with favorable mechanical properties, it’s biocompatible, and human cells can grow in three dimensions on the material,” says de Wildt.

Third, the cells need an environment where the bone could grow and thrive. “The cells are placed in an incubator that’s kept at a temperature of 37 degrees Celsius, and controls the oxygen, CO2 and humidity levels,” says de Wildt.

Finally, to mimic bone as much as possible, the bone cells are placed in a bioreactor, which is then placed inside the incubator. De Wildt: “The bioreactor circulates a nutritional fluid and replicates the mechanical loads experienced by bone in the human body. For a ‘mini-bone’ to be representative of real bone, cells need to be challenged to withstand these forces.” 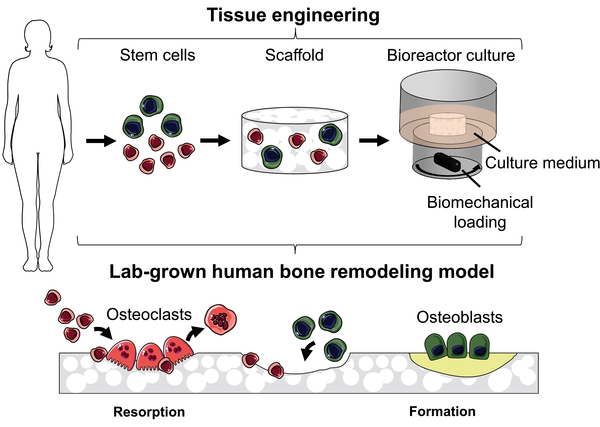 For her research, de Wildt and her colleagues explored a number of different aspects related to the in vitro growing of the ‘mini-bones’. In one study, they looked for an alternative to fetal bovine serum (which is derived from an unborn cow fetus) as source of nutrients for the cells. “We identified a human-derived replacement for the bovine serum that leads to even better growth of the ‘mini-bones’,” says de Wildt.

And in another study, de Wildt and her colleagues developed a method to mineralize silk scaffolds. Mineralization in the human body is the process by which soft tissue becomes a hard tissue. “We were inspired by how bone gets its strength, which is associated with how collagen and minerals (such as calcium and phosphate) are organized in bone. The mineralized silk scaffolds supported the resorption by osteoclasts and the formation by osteoblasts. This miniature approach to growing bone allowed us to study how bone is remodeled by human cells outside the body.”

Hopes for the future

And de Wildt has great hopes for her research, particularly given the prevalence of bone diseases. “Osteoporosis is the most common bone remodeling disease, affecting approximately 1 out of 5 people. Although it’s not lethal, it affects quality of life and fractures in certain cases can prove lethal. I hope that this research can contribute to better treatments for bone disorders. These are certainly needed given that our population is living longer, and more and more people are developing bone issues in later life.”

Furthermore, de Wildt is keen for her research to assist in changing how we test treatments for people in the future. “I do understand that animal models are needed to answer some research questions. However, I have difficulties with the ease by which they are used for research purposes. In the Netherlands, rules are relatively strict, but there are also countries with limited regulations. I hope that my research will contribute in a shift towards more ‘mini-bones’ to replace animal experiments in bone research.”