Loom Room is an artistic response to the modernist character of the building and fits into TU/e plans to transform the university campus into an attractive and accessible park for the general public.

Loom Room will hang in Neuron's atrium, which connects two floors in the center of the building. The upper floor is open; the lower floor is enclosed with glass. Jongerius will create a vertical installation where textile threads lead down from the ceiling. On the first floor, the threads form a textile cube in a twisted and tilted position.

To some it may come as a surprise: a hand-woven art installation in a building at Eindhoven University of Technology, a university known primarily for its high-tech research. But that’s exactly what Hella Jongerius, one of the leading designers of the Netherlands, will be working on with her team from late January. And not without reason, because weaving has more in common with modern technology than one might suspect. Over a two-month period, a nine-meter-high cube will be woven in the renovated LaPlace building. Neuron, as the modernist building is to be called, will be the future headquarters of the AI institute EAISI and will also house several lecture halls. The weaving process will be on site and for all to follow.

That Jongerius chose a loom for a building that once housed the TU/e computing center, and where students and researchers will soon invent clever new applications for artificial intelligence, is no coincidence.

"For Loom Room, Jongerius was inspired by the history of jacquard weaving. That is an automated weaving method from the late 18th century based on punch cards, which is known as the forerunner of modern computer programming," says Britte Sloothaak, curator of the TU/e Art Collection, who - together with Bernard Colenbrander (emeritus professor of building history) - commissioned the work.

"To the general public, Jongerius is perhaps best known for her vases with material experiments of glass and ceramics and her fabric designs for furniture and rugs. But in addition to applied design, she also creates autonomous work. Her latest artwork for the TU/e fits into a line of autonomy textile installations previously shown at Anticipation Lafayette Foundation (Paris) and Gropius Bau (Berlin).

Three-dimensional weaving is a relatively new technique with great potential, as a woven structure combines low weight with great flexibility and is potentially very strong. This is why 3D weaving is already being used in industry, for instance for wind turbine components. Since 2019, Jongerius and her team have been exploring different methods of three-dimensional weaving, combining artistic and technical innovation.

The designer deliberately chose to weave Loom Room by hand, Sloothaak says. "In this way she questions the aim for speed associated with automation, and offers alternative work processes in which there is room for tranquility, chance and craftsmanship." At the same time, Loom Room is a reaction to the austere character of Neuron.

"Neuron is a modernist building with a modernist appearance. By way of contrast, I’ve conceived a geometric soft construction. The cube hangs from wires, but at the same time moves with gravity. The object will appear to burst in an expressive way from the cube-shaped atrium on the first floor, and display an intriguing creative machine on the second floor," says Jongerius, who describes the artwork as ‘pliable architecture’. 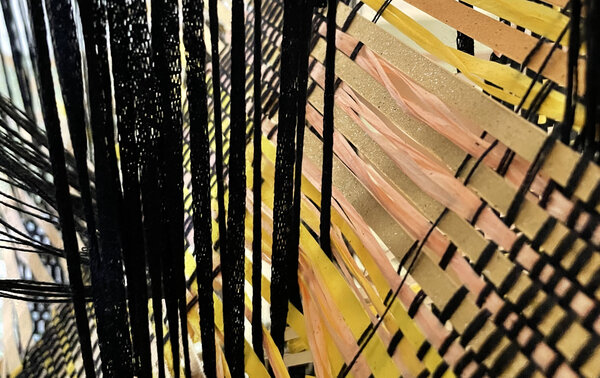 The cube will be woven by hand over a period of two months while the building is publicly accessible. During this process, Jongerius and her team respond to the space, taking into account light, for example. The loom will remain in place after the weaving process is finished. This approach is characteristic of the designer, for whom the process is at least as important as the product.

Loom Room is an initiative of the TU/e Art Committee in close collaboration with the Best Teacher Award and the University Fund Eindhoven. It was made possible with financial support from Brabant C and the Mondriaan Fund.

The artwork fits into the TU/e's plans for the university campus, which explicitly refers to the open layout of the original 1950s campus designed by Dutch architect Samuel van Embden.

"The campus is not only for students and employees, people from Eindhoven and beyond are also welcome to visit the TU/e. As the TU/e Art Committee, we want to contribute to this with a multi-year policy in which art and heritage will play an important role," Sloothaak said.

Do you want to participate in the making of Loom Room? On 25th February Hella Jongerius and her team will offer a workshop for students from the TU/e, the Design Academy and beyond. Interested students can also join the weaving team on a number of mornings on Wednesday, Thursday and Friday. You can sign up here.

After a renovation period of more than two years, the new Neuron will officially open in the spring. In addition to EAISI, the building will house 14 lecture halls and 22 smaller workspaces for students. It is designed to become a lively and inspiring place where people learn, collaborate, meet, discover and experience.

February 6, 2023
This mathematician went to infinity to bridge two ways of looking at the world
What happens if you put many particles together, take a few steps back, and squint your eyes a bit? Jasper Hoeksema tried to find out.
Read more
January 31, 2023
Rats with TU/e backpacks sniff for victims under rubble
Student Bram van Kasteren has improved communication between rat and rescuers for his master's thesis
Read more
January 30, 2023
‘I want to be part of the group, not sit in an ivory tower’
Silvia Lenaerts, TU/e's new rector magnificus, is enthusiastic about getting started at Eindhoven. Social safety and sustainability are themes she believes are...
Read more