Margriet van der Heijden: 'The challenge is how we make our voice heard within the cacophony of (dis)information'

In the final part of our interview series, we talk with Margriet van der Heijden about how she wants to contribute to effective communication between scientists and society.

More than a year ago, Margriet van der Heijden was installed as an endowed professor of science communication at the Faculty of Applied Physics, Eindhoven University of Technology (TU/e). The chair is an initiative of the Netherlands Physics Society on the occasion of its centennial. "The year has flown by. I've always written a lot about science, but communication as an academic discipline is for the most part new to me."

Consequently, she spent the first year exploring this discipline, discovering the faculty, seeing what is happening in Eindhoven in the field of science communication - "a lot" - and taking part in national initiatives. "For instance, the National Science Communication Day and discussions about shaping the new national center for science communication." Apart from all that, she and Ivo van Vulpen, who holds the same chair at Leiden University, have begun mapping out how physicists in the Netherlands view science communication.

The downside of technology

For her part, Van der Heijden finds the role of science communication in the public domain to be especially important. As a journalist, Van der Heijden has always been aware that newspapers function as a public domain where public debate takes place about what we want with the world. That this debate is now under pressure is something that the endowed professor has noticed.

"On the Internet and especially on social media, everyone can have their say. That's great, but private, professional and public opinions also tend to get very mixed up there. That makes it difficult to tell the expert apart from the layperson. Who is really knowledgeable and who is just yelling out whatever come into their heads? Moreover, the bombardment of information can leave people feeling numb. The challenge is then to remain audible within that cacophony of sounds as a university, in such a way that people know that the information you share is backed by real expertise. How can you make your authentic voice be heard?"

According to the physicist, it is important to build a long-term relationship with an audience in order to be able to do that. And in the meantime, to listen as well. "What does society need? Where do challenges lie? How does our expertise align with that? Only then will you really engage in conversation.

The year 2022 was an eventful one in many ways, both on a scientific and societal level. In this end-of-year interview series, four TU/e researchers look back and look ahead based on four themes (sustainability, diversity, health and artificial intelligence) that filled newspaper columns last year. What was the highlight of 2022 for them, what are they looking forward to in 2023, and what do they think are the main challenges in their fields? In addition to Margriet van der Heijden, we also spoke with Elena Torta, Roy van der Meel and Floor Alkemade. This series was created in collaboration with Innovation Origins.

Engaging in dialogues in living labs

Van der Heijden wants to research how to make this kind of communication effective. "For a long time, the idea of science communication was: a scientist has expertise that others lack. So to fill that gap in knowledge, she has to share her knowledge as comprehensibly as possible. Now there's the idea that this kind of dialogue should be started early on, even before a new technology is developed. The starting point has become: engage in conversation with society. Not for nothing is the German center of expertise in science communication called Wissenschaft im Dialog (Science in Dialogue)."

She finds living labs a good way to flesh this out, which can be found in neighborhoods but also on university campuses, such as those at MIT in Boston. Technologies - such as in the field of energy transition - are tested there in and around buildings in conjunction with the users. "This is called co-creation, which is a bit of a buzzword. What it is always comes down to is getting science, technology and society to benefit as much as possible from each other's insights."

By the way, this is also the theme of the summer school for young physicists that Vulpen and Van der Heijden are organizing in 2023, in conjunction with ‘Bèta in Bestuur & Beleid (STEM in Governance & Policy), among others. "So again: what and who do you want to communicate with, and how do you do it in an effective way? 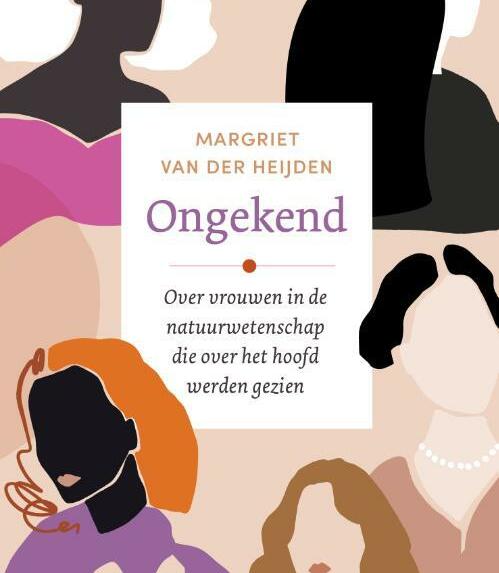 In her position as endowed professor of science communication, everything is brought together: scientific research, writing, teaching. Van der Heijden is by background a particle physicist. For her PhD research, she worked for four years at CERN in Geneva. After two years as a postdoc, she decided to take on a new path as a science journalist. She works as chief science officer at the Dutch daily newspaper Het Parool, is editor-in-chief of a radio program and still writes columns regularly for the NRC newspaper about mathematics, physics and astronomy. She also teaches at Amsterdam University College.

Also, she writes books. The nomination of her double biography on physicists Tatiana Afanassjewa and Paul Ehrenfest for the Netherlands National Biography Prize is one of the highlights of the past year.

The publication of her new book Onbekend (Unknown) is also on the list of highlights. It is a series of historical portraits of thirty women who have been overlooked in the field of physics. Although they are not prominently featured in the history books, women have played important roles in physics. A review by de Volkskrant newspaper characterizes the book as "a sampling of the ways in which women were and are still marginalized, overshadowed, ignored …, by men, by a society that still thinks science and engineering are nothing for a girl."

'Physics is nothing for a girl'

Van der Heijden: "When I was a student, I was the only girl and people often reacted with amazement to 6my choice of study. Sometimes I was literally asked to name one woman who has contributed something to physics. The image of those subjects, especially in the Netherlands, was and partly still is that they are subjects for men. That women supposedly don't have spatial insight, don't like abstract subjects."

When she writes about those experiences in 2013 in an opinion piece for the NRC,  she is inundated with responses from (mostly) women who run into the same prejudices. Van der Heijden: "It's not that those prejudices are only held by men. Or at the university. The whole of society is permeated with them. That's when I thought: I have to do something about this." So Ongekend is now in the bookstores.

As for the position of women in the (STEM) sciences, Van der Heijden sees that some catching up has taken place. For example, the TU/e the Irène Curie Fellowship program aimed at raising the percentage of women in the permanent science staff. "What I like is that TU/e is also now thinking about how to keep those women on board. But there is also still plenty to do. The world has changed very rapidly. Particularly since the advent of contraception, women have started thinking a lot more about how they want to organize their lives and what choices they want to make; men tend to lag a bit behind in that. And you basically want to get rid of that man versus woman thing anyway and have it be about diversity in a much broader sense."

'I can tell from everything that my work is needed'

In 2023, the professor hopes to flesh out in concrete terms the broad outlines she sketched in her first year. In addition to organizing the summer school, she will continue researching effective forms of science communication. Also, together with Vulpen, she plans to conduct a survey among physicists in the Netherlands to see what support they would prefer to receive when it comes to developing communication skills and projects.

She looks back fondly on her first year in Eindhoven. "I come from a tradition of fundamental research, while TU/e is a technical university where there is a much greater emphasis on applied research. Research routinely has a direct link to actual practice. In many cases there's already a lot of communication with companies. Then there are all those major societal challenges, such as: how do we deal with the climate crisis? How do we make the energy transition run as smoothly as possible? Eindhoven can play a major role in these, and I hope that I will also be able to contribute from my background and position. I find that idea really inspiring."